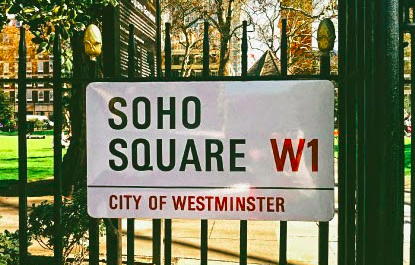 I can’t tell you how long it took me to decide what to wear for the meeting … “do I go glam / do I wear the red PVC duo I wore to the other meetings / do I bear flesh / but I don’t want to look slutty / shall I go rock chick???” etc etc etc. The truth is, I hadn’t felt comfy in the PVC get-up, it was more Kylie Minogue than me and I had the feeling Muff was going to see through any pretence so after 50 outfit changes, I opted for the I-haven’t-really-tried-but-actually-I-have kind of look, and  I threw on a vest and pair of jeans.

I arrived early and went for a coffee in the nearby cafe Maison Bertaux on Greek Street. I was so nervous, I smoked my way through half a packet of Marlborough lights. I smoked quite a lot in those days, it went hand-in-hand with my wild musician ways. This was back in the day when you could smoke INSIDE bars / cafes / restaurants! can you imagine that now? oh the days when you could prop yourself up at a bar and enjoy a ciggie WITH your beer! I don’t smoke now *ahem* ok aside from the odd party, but I do miss it. KIDS – For the record, smoking is NOT cool. Aside from the possible onset of death it stinks and gives you wrinkles. It’s better not to even start …. drink shots instead. PS. That last bit was a joke. But I do miss it.

I wasn’t so much nervous of meeting Muff himself, it was just one of those ‘everything hinges on this’ kind of moments. I had an amazing opportunity sat in my lap, It felt BIG and and the gravity of it made me feel a little sick / but also unbelievably excited! Despite giving myself plenty of time, I arrived at 10 Great Marlborough Street late, since I have the sense of direction of an unborn baby so I clambered into the building flustered and sweating … which was not the entrance I had hoped for.
The Sony reception was huge, stark, very white and very stylish … with big vibrant images on the wall, of the various artists signed to the label, like Jamiroquai and Sade. A stern looking security-type dude behind the desk eyed me suspiciously, as not only was I sweating profusely but I was probably looking a little peaky now too. In between trying to catch my breath I managed to blurt out “Jodie Seymour for Muff Winwood please!” Suspicious looking dude fumbled around in a drawer and pulled out a security badge which he clipped onto my vest. “Er can’t I move it to my jeans?” security man shrugs. “Take a seat ma’am, someone will be down for you shortly.” 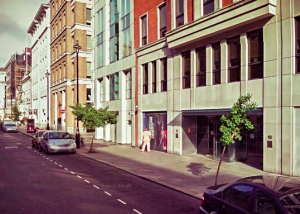 I took a seat on one of the modern benches and got myself together. wiped the shine from my face, applied some lippy and took some deep breaths. I then idly leafed through one of trendy mags on the table, not reading a single word while I got my thoughts together. I had showcased for other labels so I didn’t know why this should be any different? It was just a chat, I wasn’t even performing! Perhaps it was because I already thought so highly of Muff. I didn’t want to disappoint him, and everyone else who was rooting for me … Jed, Andy, the band, my parents. But then, I was here because Muff liked the music, so surely he just needed to see if I was ‘star’ quality. Then words of the Arista A&R came back to haunt me … she sounds and looks great, but she doesn’t act like an artist … I hadn’t understood what that meant at the time, but I did now. All the great artists are great because they are uniquely themselves, they are not pretending. During the meeting with Clive it was true, I wasn’t myself, I felt awkward, and I was trying too hard to be what I thought they wanted me to be. I was trying to ‘be’ an artist.  So the trick, I decided, was to simply be myself instead.

Seconds later a young, funky-looking, friendly-faced bundle of energy came hurtling out of the lift towards me, and introduced himself as George. George was a JNR A&R at Sony. In fact when I think of Sony, I always think of Muff, Lincoln and George – The three Music-teers! (ok it almost worked.) I liked George from that very first meeting, he was unlike any music industry professional I had ever met. He had an easy, warm, unaffected nature and his presence always put me at ease. We chatted easily as we made our way up to the 6th floor and I was thankful to have him by my side at that moment in time. We stepped out of the lift, and that was when I met Dawn John and Muff Winwood.
|
Muff Winwood, Record Labels, Signing with record label