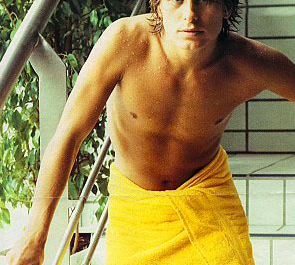 So to get the ball rolling with Jud, Muff put me in touch with a London-based law firm that specialised in music contracts. The lawyer that would work my case was called Stephen. He sounded friendly but professional on the phone, and I made an appointment to visit his office the following week. I was a little nervous – I had seen my fair share of courtroom drama so I was expecting a young, slick, quick-talking whippersnapper with a large vocabulary – but thankfully, Stephen wasn’t anything of the sort.

Stephen was young, smiley-faced, and floppy-haired – he also reminded me of Hugh Grant, which of course I informed him of not long after we met. We got chatting and I told him my story to date. He had a warm, easy going manner which enabled me to be myself, so I felt at ease with him from the start. Many of our meetings took place at the office, but we’d often pop out for lunch or dinner somewhere to discuss the contract. One particular evening, Stephen took me to a ‘members only’ club somewhere in the heart of Soho. I can’t remember exactly but I think it may have been Soho House, on Greek Street (the reason for my jarred memory will become apparent in a moment.) What I do remember is; it had several floors, it was super posh, the drinks cost a small fortune and it’s where the industry folk and celebs went to be ‘celeby.’