Finally things were beginning to move forward a little in regards to all the contracts I had in the air, and I probably spoke to my lawyer Stephen, more than anyone else in my life at this point in time. We were still thrashing out the contact with Jud (the producer), with Sony (the label), with Windswept (the publisher), and with Emily (the manager) and bearing in mind these contracts weren’t just a few pages long … some were thicker than your average bumper edition of vogue magazine, it was a hard (and expensive) task.

When I first went through the contracts with Stephen (who I always thought looked a bit like Hugh Grant – that’s not why I hired him mind, and it doesn’t really impact on the story, except to give you a nice visual) I would politely nod, and pretend I had the foggiest clue as to what he was rambling on about, so he wouldn’t think I was stupid. But I soon realised that with so much on the line (ie my future) this was no time to be coy, so I got him to explain everything, several times if necessary, because I, like most people couldn’t understand a single word of it. Trying to understand the language of law is like trying to get a 6 year old to decipher a Shakespeare novel – it’s written using English words but the words are jumbled into such random sentences they may as well be written in gobbledygook (yes, exactly). Why it’s necessary to do this? I don’t know. Perhaps if it was written in plain English we wouldn’t actually need lawyers! that’s how clever they are, they invented a whole other language just so we’d need them to translate it … genius really, clever little rascals.

Stephen was really helpful throughout, and very patient with me, as any good lawyer worth his salt should be. Some of the contracts were relatively straightforward – and the contract with Sony went smoothly enough, though it often felt a little strange battling out points that wouldn’t really come into effect for years to come. I was going to be signing to Sony for a 6 album deal. That blew my mind a little bit. It could also feel a little awkward at times, for example, meeting up with Emily (the manager) for a coffee while only that morning our lawyers were battling it out for some point or other, but of course neither of us would mention it. That’s business, it’s necessary and everyone involved knows it. That’s also the plus side of having lawyers, they can do the dirty work so Emily and I don’t have too, thus preserving an amicable relationship. But when things get messy, they can get really messy, really stressful and really expensive.

The contract with Windswept was a big one, aside from dealing with the present, much of the contract referred to the future … things like: if and when I left Windswept they would continue to own my music for 13 years – points like that are pretty standard, but as a young 21 year old who can’t really see into next week, it is vitally important to have someone on side that can see the big picture, thus safeguarding your future, because what might be a pain in the ass to deal with now will only come round to bite you at a later date … and it will bite you.

So having a good lawyer is vital and makes all the difference in these situations. However a good lawyer is also in it to win it (that’s what we pay them for after all) and when it came to my contract with Jud, there still wasn’t any light at the end of the tunnel, our lawyers had locked horns, and unless someone made a move soon, there wasn’t going to be a record deal. So I made a decision …

Months were passing and all of my time was spent discussing contracts. I was itching to sign with Sony so I could just get on and start writing, but the contract between Jud and I was still going back and forth, and it was taking it’s toll on us both. It had been a long time since Jud and I had actually spoken too; everything that was going on with the contract had put a rather large spanner in our relationship which I was very sad about. Our lawyers continued to fight our corners, and while Stephen (my Hugh Grant look-a-like lawyer) was doing a great job on my behalf, I desperately wanted it to end … so I called a halt to it. I think Stephen would have preferred to continue fighting various points but I was eager to put this behind me and move forward. I hoped this wouldn’t be the end of my relationship with Jud, but I’m happy to tell you it wasn’t. In time we resumed our musical relationship and thanks to Sony I even flew back to the states to write with him again. He’s a great guy, a great writer and we’ve remained friends to this day.

So finally it was time to sign on the dotted line. I can’t tell you the relief I felt … I was starting to think Sony might lose interest, but they didn’t. I signed with Windswept, with Emily (my manager) and finally, with Sony.

I took the train to Sony HQ (as I was living with my folks in Essex at the time) and met Emily at the station. Together we went to Muff’s office, and I had to stop myself from galloping cowboy-style into his office and screaming ‘YEEEHAAAA’ at the top of my voice. I think Muff was aware of how frustrated I had been, and he was a real gem about it all – he seemed as chuffed as I was, that the day had finally come.

I wasn’t sure what to expect in this scenario – you’ve seen the films … would there be cigars? semi-naked women? a party of sorts? champagne? well perhaps if I was signing with a rock band there may well have been all of those things but as it was, it was quite civilised. There was Muff, the lovely George (remember George?) Lincoln, and some other dudes I don’t quite remember. We sat round a large oval table and I signed my name. It was that simple … then we opened some champers!

I floated home on cloud nine, and arrived to find Andy and my folks over the moon … and my lovely dad had bought me a large bouquet of flowers. We celebrated that night and I could not have been happier. Had this happened in this day and age I probably would have instagrammed the whole experience, but this was back in the day when mobile phones still resembled small bricks so alas, I have none … except this snap of me and my dad (who appears to look remarkable like Peter Griffin in this photo!) and the flowers.

Things were about to change drastically for Andy and I, as not only was I now a Sony recording artist, but I also had some CASH. We were moving to London baby! 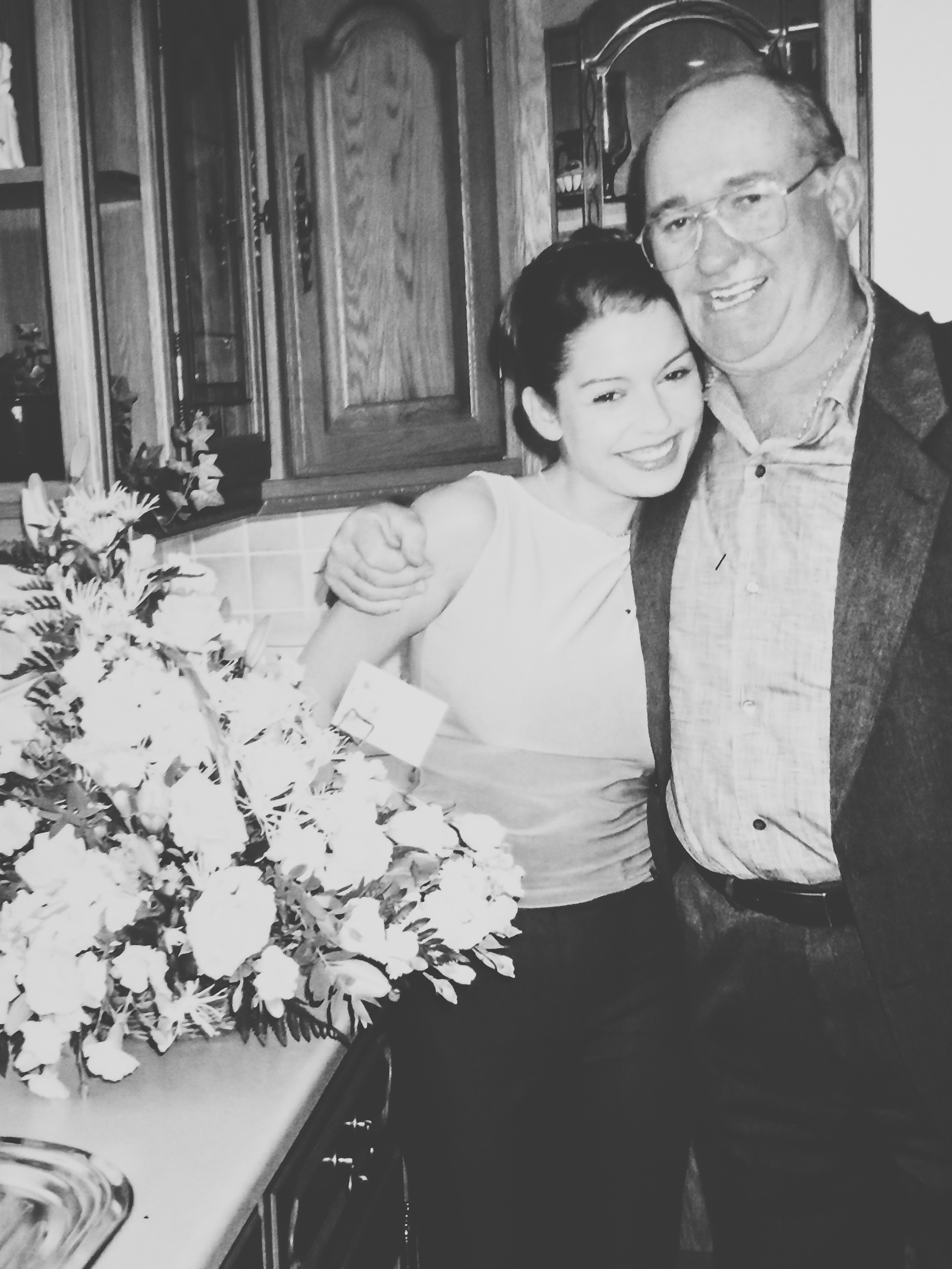