The video shoot turned out to be quite a giggle, though not necessarily for Jud. On day one, the first scene we shot was me driving Jed’s beautiful white convertible BMW down Melrose avenue. I think we had only been filming for 10 minutes when I reversed around a corner, scraping Juds beautiful paintwork along the curb. Jud was understandably distraught the poor guys, but he quickly recovered … needless to say that was the first and last time I drove his car.

The next scene took place on Santa Monica beach. Our plan was for Benny (the male model) and I to run along the beach holding hands frolicking in the surf … and then kiss (original I know). However seconds before we practised the scene I saw to my absolute horror, that he had snot on his top lip! I was faced with the awkward scenario of telling him, or I could just ignore it and ‘be a professional.’

Well of course I wasn’t about to do that so before the camera man yelled action I yelled for Fran, the lovely little bubbly make up artist. While staring her hard in the face I said “I think Benny’s a bit shiny and might need a touch up!” Fran starts dusting him down then exclaims “oh jeez you’ve got a big booger hanging off your face there deary!” She wipes him down leaving him booger-free and me red-faced but oh-so thankful. So despite the extremely unromantic scenario that just took place we kissed awkwardly, and ran through the FREEZING cold water pretending we were very much in love.

I thought this would be the worst of it in terms of awkward humiliating shenanigans but it wasn’t to be, there was far worse waiting for me around the corner …. 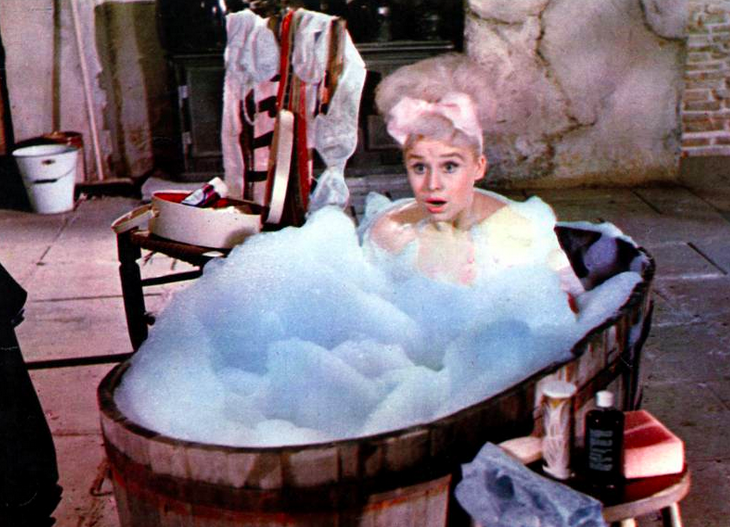 The last scene was in the bath. Yes, the bath. I was in a bubble-filled bath, lip syncing into the camera which was right above me – (The cameraman had to stand with a leg on each side.) Everything was going fine until I realised the bubbles were going down! The plug had come out so it was a frantic dash to get it in before Jud and the entire crew saw my ladybits! After much splashing about there were bubbles everywhere, however my modesty stayed in tact. More scenes included lip-syncing down Melrose (cringy but fun) more lip-syncing whilst writhing up against model Benny (just plain cringy) and lip-syncing whilst dancing around in a pvc out-fit with Madonna-esque slap-head ponytail (not my finest hour.)

I’d just like to tell you now, there is no way in hell that you, or any other being on this earth will ever see this video. So don’t even ask (unless you intend to pay handsomely.)

So – at the end of the video shoot we all went out drinking and dancing our way around Hollywood. It was having a great night until ole Benny boy started to show his true colours. He was quite a vain guy and definitely not my cup of tea. When the last person left the party. He saddled up to me and began a car crash of seduction techniques which included getting misty-eyed while telling me how much he loved babies and puppies! For real!!?? I stopped him right there and told him this sort of tripe might work on his LA lasses (tho I highly doubt it) but it’s not gonna cut it with an English lass. So he left, and that was the last I saw of him.
Filming the video and being the centre of attention for that period was quite exciting, and it would be easy to get carried away believing in your own hype. I enjoyed it as a novelty period but in truth it’s not a world I’d really ever want to be a part of. People react differently to you when they think you’re ‘someone.’ To be honest I’ve battled with this concept my whole professional life; I want to share my music and I want it to reach people, but in truth the last thing I’d ever want to be is ‘famous.’ I couldn’t imagine anything worse than having to share my life with the public. There are artists that have successful careers without having their personal life on public display for all to see. So I continue to make the music, doing what promotion is necessary then I’m back in my warm cosy hole in the english countryside as fast as possible.
|